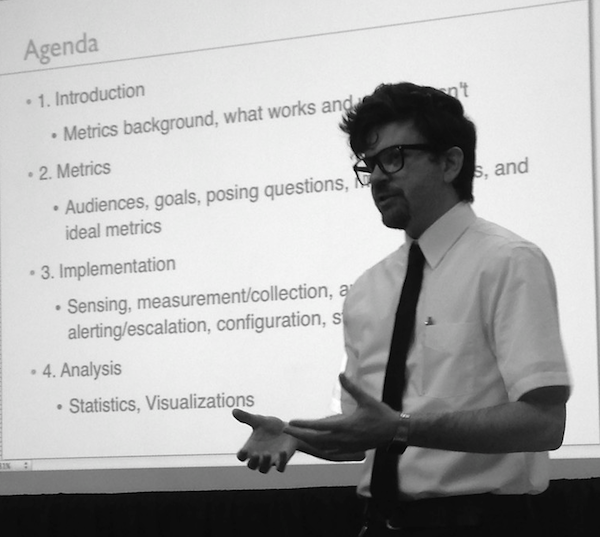 At USENIX LISA`13 I helped run a Metrics Workshop, along with Narayan Desai (Argonne National Laboratory), Kent Skaar (VMware, Inc.), Theo Schlossnagle (OmniTI), and Caskey Dickson (Google). This was an opportunity for many industry professionals to discuss problems with performance metrics and monitoring, and to propose and discuss solutions. It was a lot of fun, and was very useful to hear the different opinions and perspectives from those who attended.

We provided guidance for choosing more effective performance metrics, which involved helping people think more freely and creatively, instead of being bounded by the metrics that are currently or typically offered. I also covered key methodologies, including the USE Method, which provide a checklist of concise metrics that are designed to solve issues. I ended the day with five minute lightning talks on statistics and visualizations.

There were about 30 participants, and Deirdré Straughan videoed the entire day long event, which includes the talks by the other moderators. The videos are on youtube:

As an exercise, we identified several targets of performance monitoring, formed groups to propose ideal metrics, then presented and discussed these metrics. I've listed a summary of the metrics below, and also submitted them to the monitoringsucks project on github.

Thanks to all those who attended and helped out!