While all eyes and instruments were aimed at the total eclipse of August 21st, I had a video camera pointed in the opposite direction. I was hoping to catch changes in the landscape – perhaps the Moon's shadow as it raced by. This was filmed from on a road north east of Madras, Oregon, almost right on the center line. It was just an experiment that I wasn't going to share, but when I saw it afterwards I thought it might interest some. Below you'll find time lapse and full videos, frames, and a montage.

These videos start 6 minutes before the total eclipse. I had aimed the camera at the landscape, to look for the Moon's shadow, and not the sky which looked hazy and boring. But that changed during the eclipse.

While the image does what I saw justice, the audio captured does not: it became eerily quite before the eclipse, adding to the anticipation. The video camera, however, auto-adjusted the audio gain, and a distant engine sounds louder and louder. In person it was very quiet. 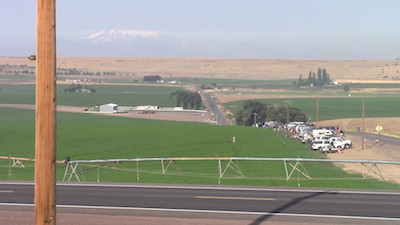 The partial eclipse lasted 73 minutes. The above frames show before the partial, 36 minutes to total (C2), and 10 minutes to total. During this time, not much looked different to the naked eye as it continually adjusted to the decreasing light levels (increasing pupil size). Most noticeable was the temperature of sunlight on skin, which changed from hot direct sunlight to cool direct sunlight. (I'd like to know: at what time during a partial eclipse is the sunlight equivalent to that on Mars?)

The video camera was automatically adjusting to lower light levels as well, resulting in an image that resembles the naked eye view. It likely helped that I was using zoom to frame the shot, which means less light on the sensor than a wide-angle shot, causing the camera's image to darken sooner around the same time as the naked eye view.

The image below shows 5 minutes to the total eclipse. Everything still appears bright, but the Sun is a thin crescent. The next image, at the minus 1 minute mark, shows Mt Jefferson disappearing as it enters the total eclipse, and then things start changing fast. 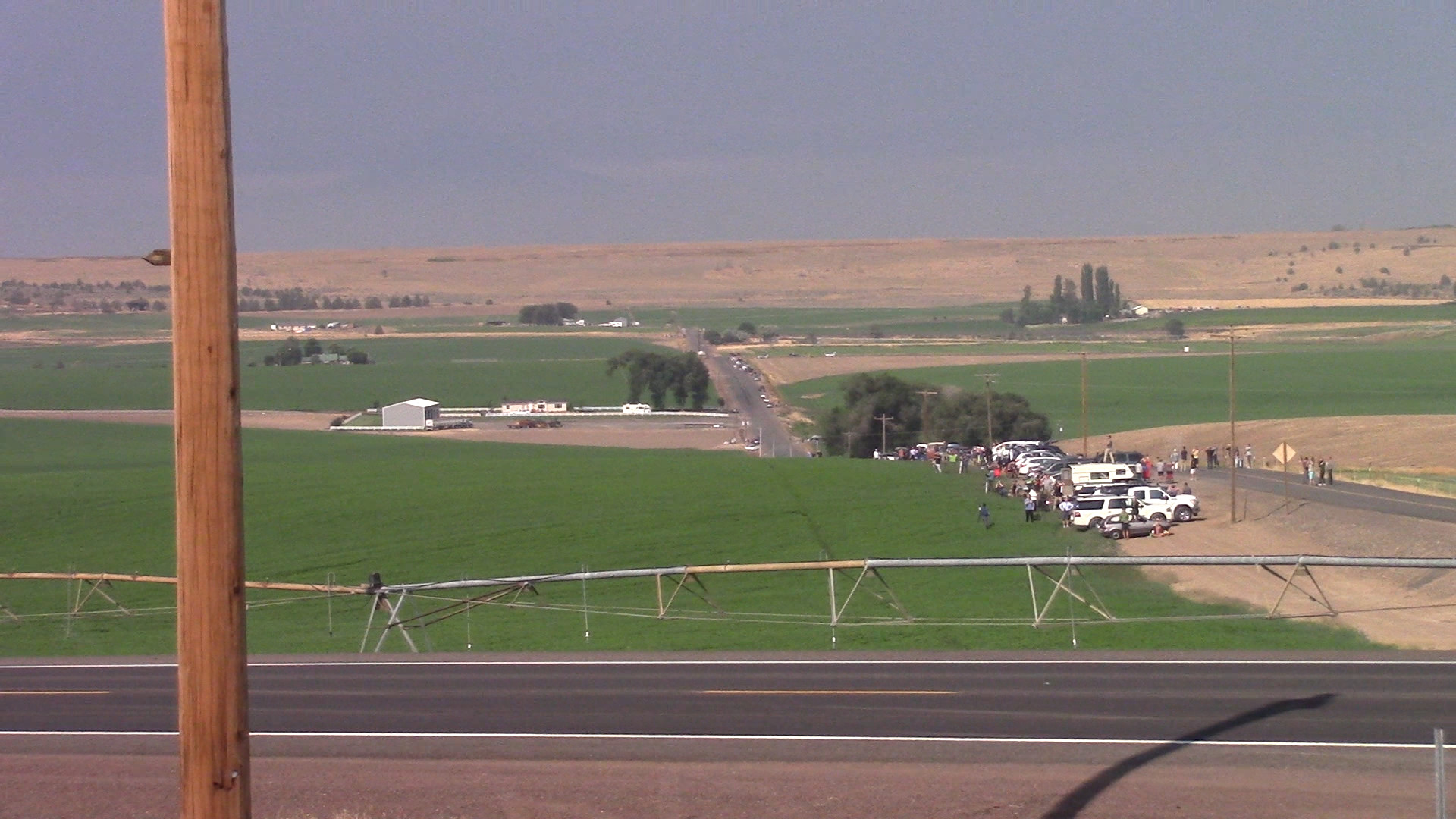 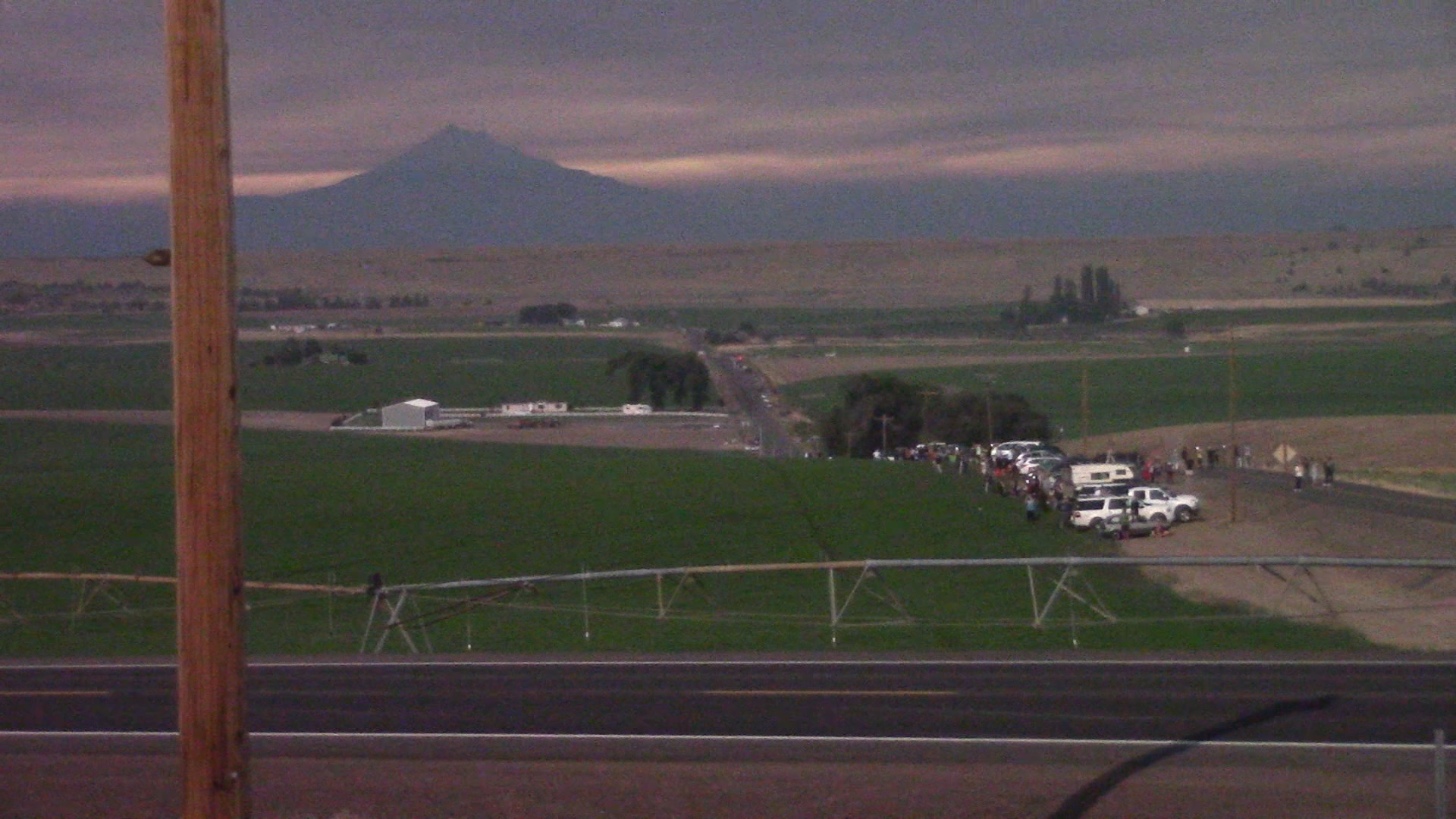 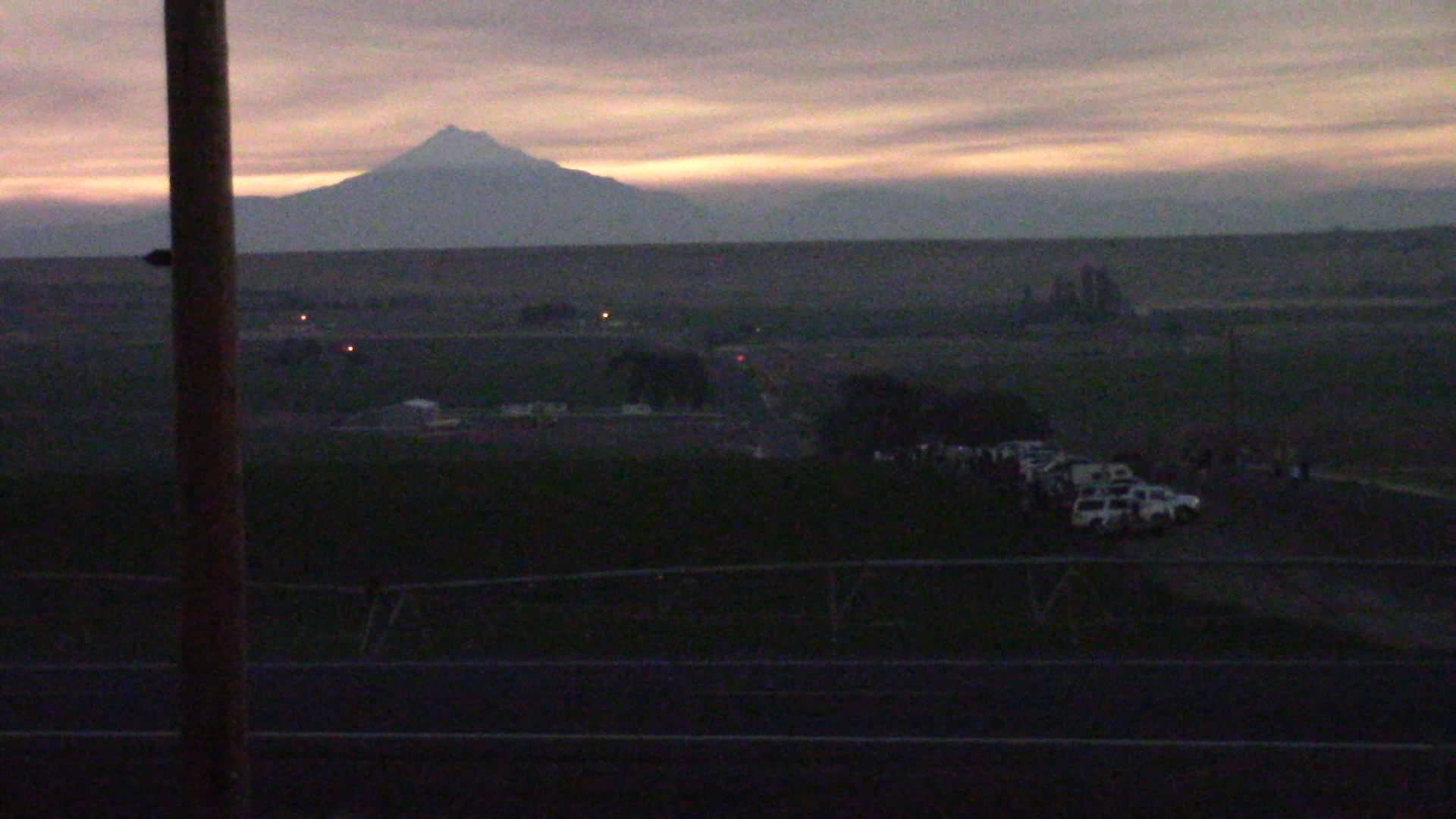 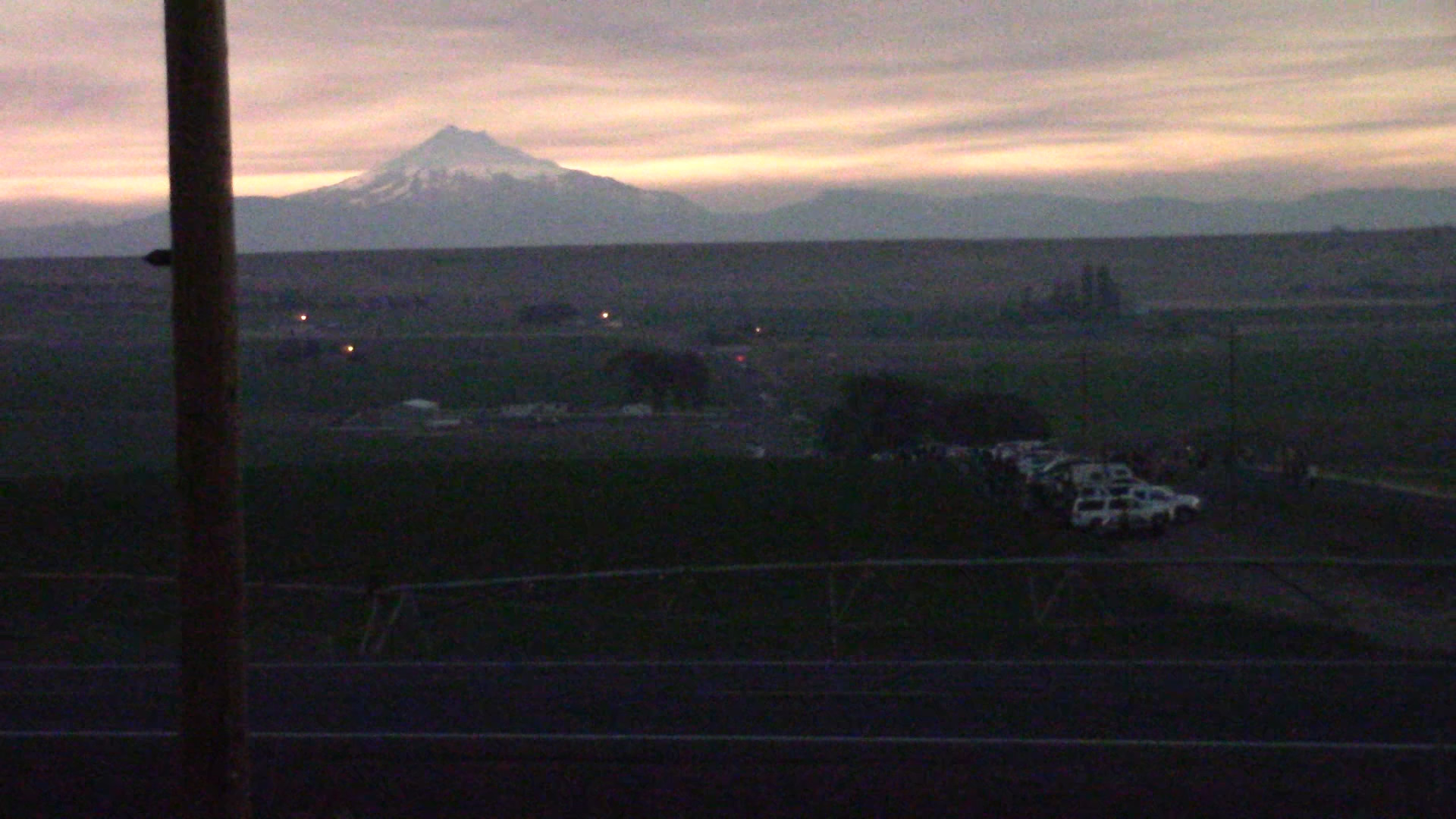 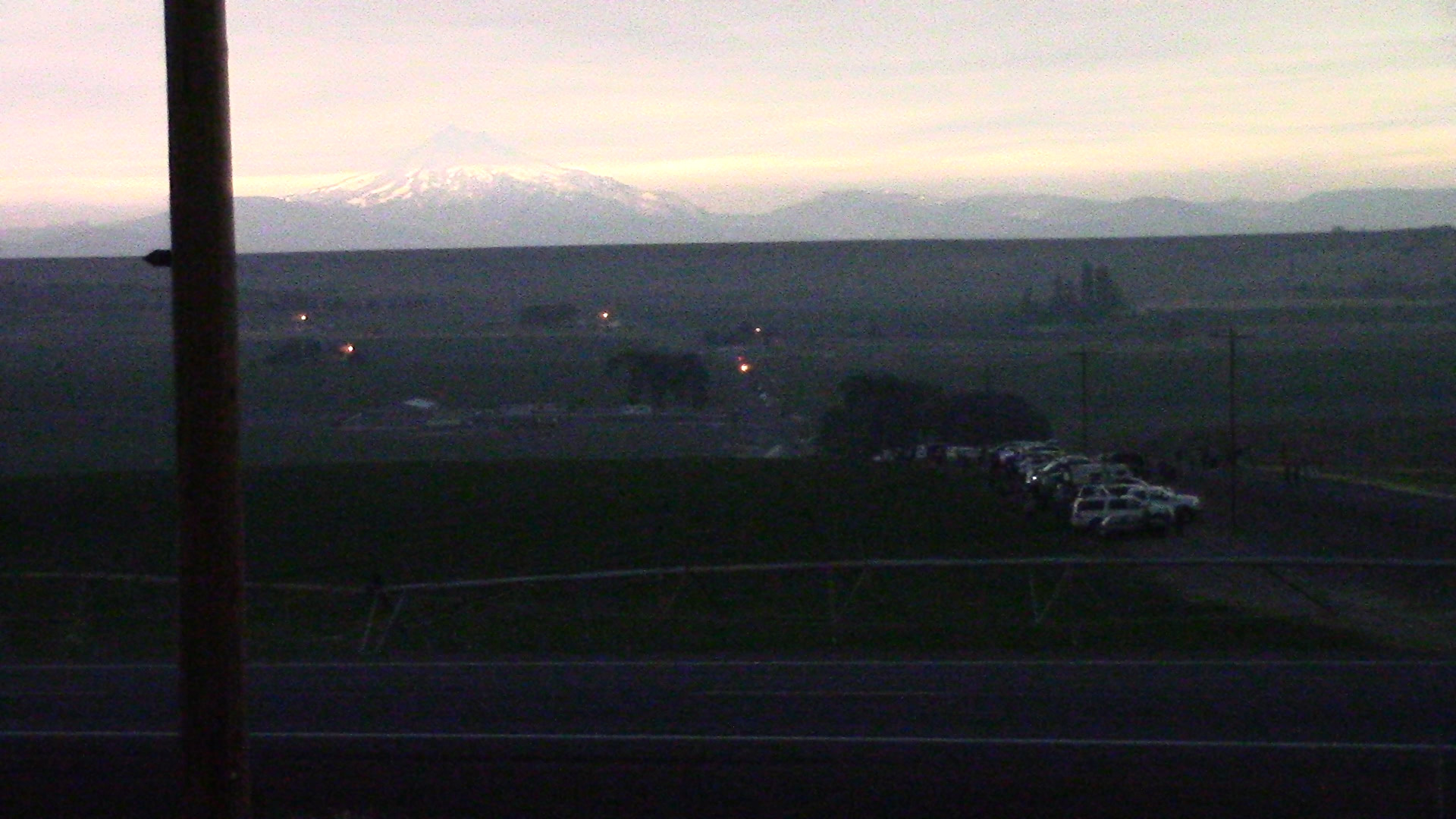 By 1 minute after the eclipse, things were starting to appear normal again.

The images resemble what I saw, much by chance: due to the attributes of the video camera and that I had zoomed in. In the middle of the eclipse, it was not midnight-dark, but rather a very late after-sunset dark. And it looked like there was a sunset in all directions.

If I see another total eclipse I'll film the landscape again, and this time pay more attention to the video setup. My camera was bumped this time, and it ended up a bit crooked, plus there's a telegraph pole in the way. 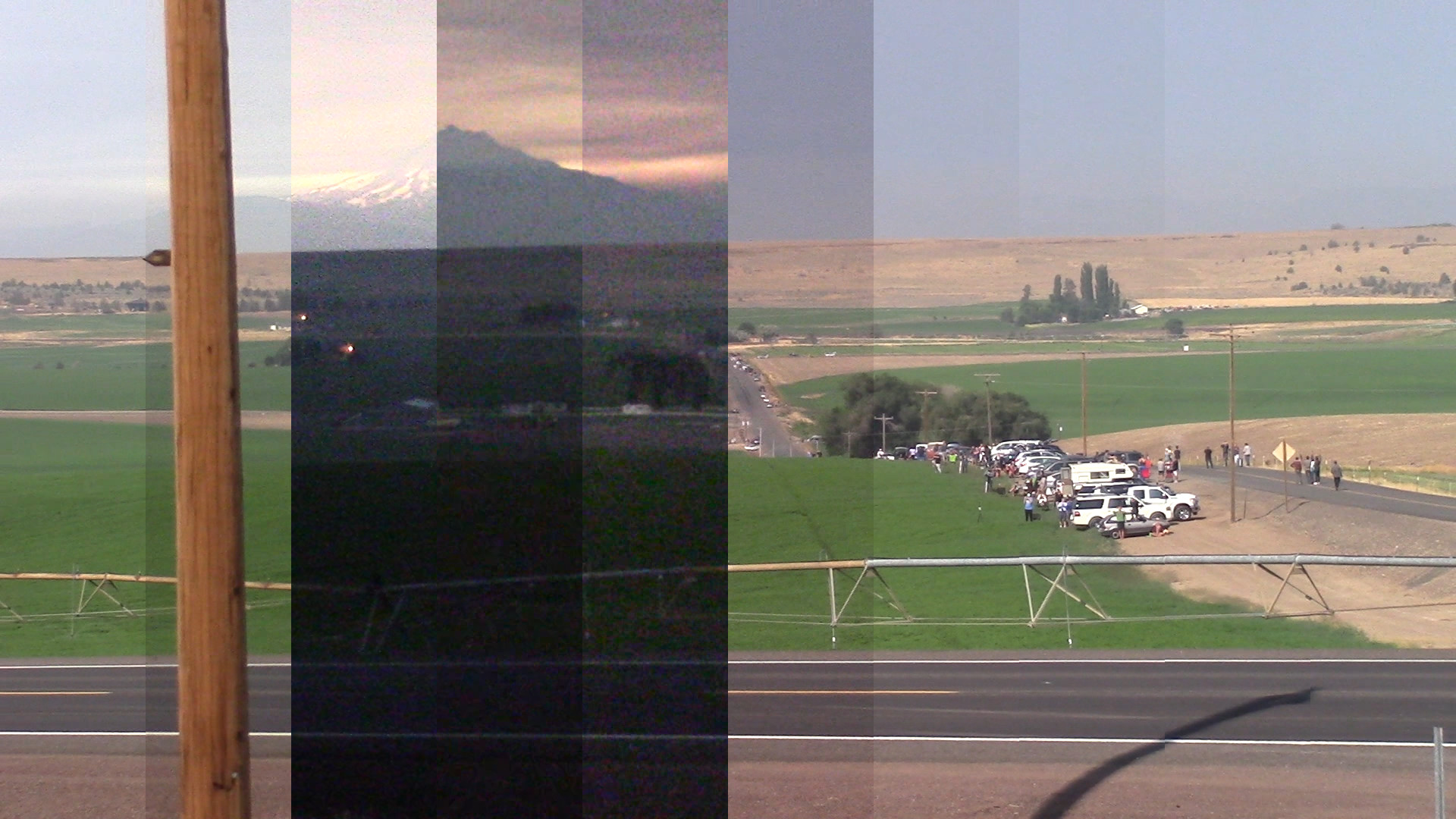 This shows the different light levels by taking 10 vertical strips from 1 minute intervals and arranging them side by side. To place Mt Jefferson in the eclipse with the video I have, I had to change the time order from right to left, so that the right-most frame is -5 minutes, and the left-most is +2 minutes. Here is a left to right version.

Immediately after totality I briefly observed the Sun through a pair of hand-held 20x binoculars (don't do this yourself; I timed it carefully so I was at no risk of seeing the end by accident). I observed three areas of solar prominences and loops in incredible clarity. Their color was wild: an intense violet that I've only seen once before, on some flowers in direct sunlight. And the clarity was stunning: I could see fine lines and details.

I assumed that these details would be captured countless times by photographers, but browsing the images posted so far, including the NASA videos, I've seen no pictures that do them justice. Some images are blurry, but most over-expose these prominences (eg, the top image on Wikipedia's Solar Eclipse page), and they appear as saturated violet/white blobs that bleed over the Moon's disk. I suspect the human eye has a better dynamic range than cameras, and can handle seeing these and the corona at the same time, whereas photographers set light levels to capture the faint corona, which over-saturates the prominences.